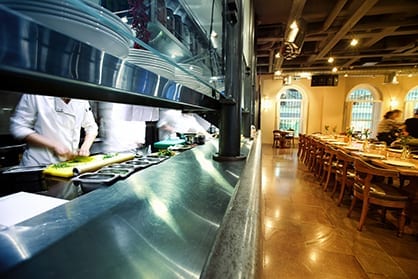 For hotels, water reduction is a critical issue. Environmental issues are increasing in severity, energy and water costs are volatile and properties are faced with ever more challenging goals to hit. Here is a practical option to help decrease water usage, increase costs savings and ultimately, improve property operations while decreasing pressure on our natural resources and environment.

Chefs love to cook with steam. It’s a fast, efficient, and healthy alternative to other cooking methods. What most end-users don’t love about using a convection steamer is the high-water consumption of steamers. High consumption = high utility cost. However, the right steamer can help combat not only high-water usage but also high energy cost – without increasing cook times or compromising the quality of the food being produced.

Vulcan’s LWE Electric Steamers are the first Energy Star rated steamers designed to conserve water usage by up to 90% and reduce power consumption by 50%. Not only does that save on utilities, but it also saves on maintenance – less water means less scale build up in the boiler of the unit.

Less steam generation means less energy usage – 50% less energy to be exact. Unlike other Energy Star steamers that may be de-rated or underpowered, Vulcan’s LWE steamers are full-power units to give you maximum cooking power at the beginning of the cook cycle or whenever needed while modulating power during the cycle to minimize excess steam production. Less excess steam means less water usage as well. In general, a 5-pan steamer will use approximately 45 gallons of water per hour if run continuously including water to produce steam as well as cooling water to cool-off steam condensate before it enters the kitchen drain. Vulcan’s LWE steamer will use approximately 5 gallons of water per hour, reducing the water usage by 90%.

Using an average of a savings of 20,000 kWh per year (a 5-pan steamer being used 8 hours a day for 365 days), an end-user could see savings of $2,000 to $4,000 annually depending on where they are located and the water savings can equate to an additional savings of $500 to $1,500 depending on location and usage. That’s a lot of savings! Lastly, keep in mind that Vulcan’s LWE Steamer is Energy Star rated and could qualify for rebates from your energy provider.