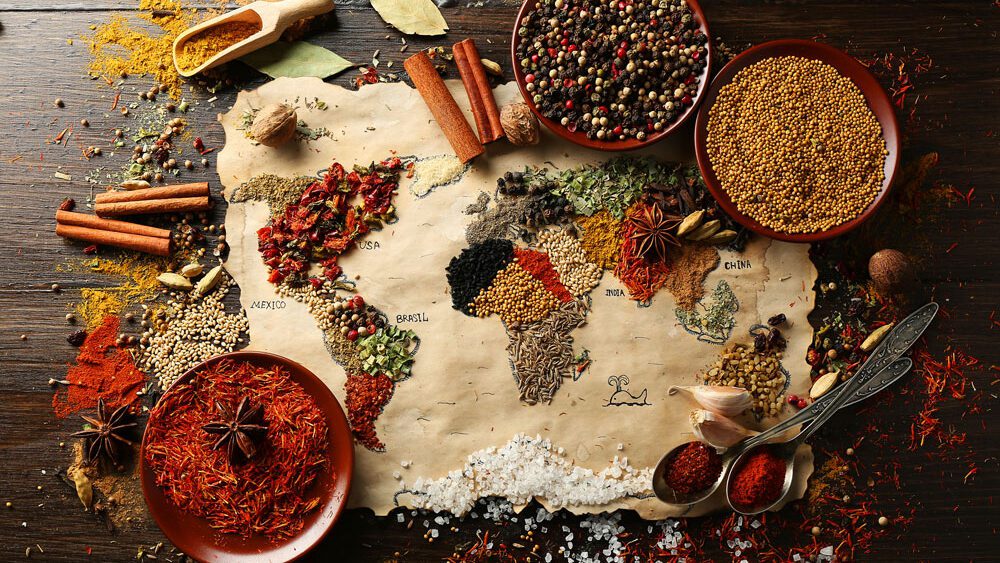 There’s no denying the chill in the air. As your guests wander in for a seasonal celebration or a quiet night out, warm their palate with bold spices and put creative new spins on old favorites – all while minding your budget.

According to Datassential, the bottom line for this winter’s food trends: spicy. Current tastes are also trending toward South Asian cuisine. They have also thrown in a handful of an American favorite and a new wild, foraged treat to enliven your menu.

Spices and Seasonings – Did you know that Indian black salt (also known as kala namak and Himalyan black salt) isn’t really black at all? It’s pink Himalayan salt that’s heated with harad seeds and other Indian spices. During the heating process, the salt turns to a somewhat dark purple-brown, nearly black, color. Don’t mistake it for Hawaiian black salt or black lava salt – they’re a blend of activated charcoal and flaky sea salt, and have an entirely different flavor profile.

From Ohio to Nevada, amchur (amchoor) is making appearances on menus in traditional American fare, as well as some South Asian favorites. From popcorn chicken to chana masala the tangy flavor of this unripe, dried mango powder is offering a nice acidity to enliven the taste buds.

From margaritas to soups amchur gives you the acidity you need with an exciting new flavor profile. Try sprinkling it on seasonal fruits and vegetables for a bit of brightness to lighten up even the darkest of winter days.

According to Datassential, amchur currently has a menu penetration of less than 1%. Six percent of consumers have tried it and 3% of consumers love or like it. There’s plenty of room to lead the way with this trend and stand out in the marketplace by simply using it to punch up flavors of some existing menu items.

Rounding out the South Asian flavors is asafoetida (pronounced as-uh-fet-i-duh), which hails from India. Asafoetida is a gum extracted from ferula – an herb that’s part of the celery family. It’s sold as a coarse powder with a smell similar to boiled eggs.
According to Bon Appetit, “When used properly, a pinch of asafoetida supercharges every other spice in the pan, like salt but in a funkier way.” It’s too pungent to use as a finishing spice but is a flavorful addition to roasted carrots or tofu scrambles or quiche.

Similar to Indian black salt, asafoetida is wonderful in South Asian dishes, but don’t overlook the possibilities throughout your menu. Its egg-like flavor and smell are a real bonus to vegan egg dishes and anywhere you’d like to punch up the umami flavors of a dish.

An American Classic – Hailing from Baltimore, Maryland, Old Bay seasoning experienced a surge during the pandemic as home cooks looked to up their flavor game. McCormick took advantage of this trend and partnered with iconic brands for Old Bay flavored treats like Goldfish crackers and hot sauce – both of which sold out in record time. You can even find Old Bay flavored vodka sold by George’s Beverage Company in Maryland.

While it’s not a new spice blend, Old Bay is having its moment outside the mid-Atlantic states, and now is the time to get this trend on your menu. The obvious choices are lobster and crab. But try adding it to potato chips, french fries, or popcorn for a punchy flavor boost that’s anything but ordinary. Your chicken wings are crying out for some Old Bay seasoning, as are some of your creamy soups and sauces.

Moving to the bar, you can spice up your Bloody Mary’s or on-trend Micheladas with a bit of Old Bay seasoning. Or try it in your martini – shaken, not stirred. Any way you try it, Old Bay seasoning is a spice trend that is anything but old.

Wild American Chiles – Rounding out our spicy winter selections is the “mother of all chilies,” the chiltepin pepper. These are the only peppers native to the United States. They’re found growing wild in the southwestern US as well as parts of Mexico. As a wild, foraged ingredient, chiltepin peppers are best used as “limited-time offers” due to their sometimes-limited availability.

On the Scoville scale, chiltepins run from 50,000 to 100,000 units, putting them in the same range as a Thai pepper. Often chiltepins are dried and have a smoky flavor, but they can also be used whole or ground into a powder.

The Avendra culinary experts are available to help you take advantage of these trends and to make the most of your spend this season. Ask your Avendra sourcing specialist to connect you with these spicy selections to liven up your winter menu offerings.